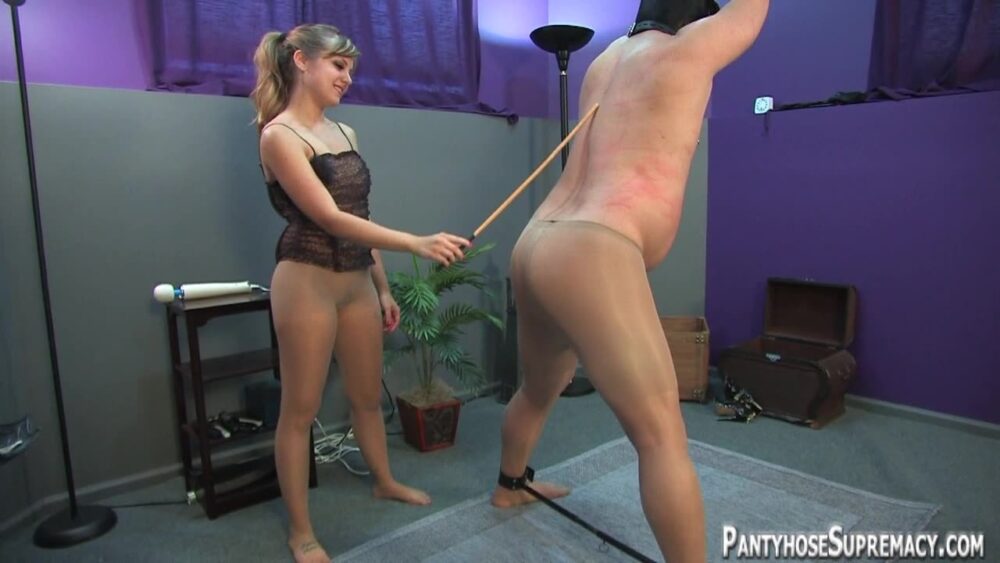 Mistress Missy is breath taking as She spends 84 minutes breaking marco’s will. Fans of Her perfect size 5.5 feet will rejoice as She terrorizes him with Her little pink toes. Trample, ball kicking and foot domination lead off as he is hog tied then released to receive Her kicks. He is bent over the horse and solidly fucked before She follows it up with the giant black dildo. He gets a chance to relieve himself as he is belittled under Her feet. Total control from one of the most beautiful young Dommes alive.
You are kneeling in front of Mistress Missy now. She dominates you in a humiliating one-on-one point of view for five minutes. You worship Her stockings and heels and lay beneath Her as She stands over you and shows you how She will smother you under Her pussy. She turns and Her perfect ass is over your face now and only a thin layer of nylon separates your face from Her fragrant ass. Next She has marco laid out hogtied and he is obliged to worship Her shoes and kiss Her pretty pink toes. She takes Her shoes off and carves scratches in his back with the high heels while She sits on his head.
Mistress Missy carves deep scratches into marco’s back with Her high heels as She tells him to look at Her pretty pink toes. She frees him from his hog tie and climbs up on him like a door mat. Moving behind She kicks his legs wide apart and kicks him in the back of the balls several times. Really enjoying Herself now, Her perfect little sized 5 ½ feet trample all over the submissive. She drops down to give him a light spanking then stands for more ball kicking.
She orders marco to flip over onto his back. She positions Herself over his face and uses him as a human spittoon, dropping long strands of Her delicious spit down his throat. Time for more trample as She climbs up on his front and walks on him like a carpet. She moves the chair between his legs and sits down. Her tiny feet beat a tattoo on his cock and balls as they mash and kick them with Her nylon covered feet. Non stop verbal humiliation as his cock is dominated beneath Her tiny feet. She stands him up and ties a length of nylon around the tip of his cock and then strings it between his legs for a leash. She pulls it tight behind him and kicks him several times, very hard, in the back of the balls.
She moves to get a pair of beige pantyhose and hands them to marco, ordering him to put them on. She moves to get the vicious quirt and begins to whip him as he tries to put the pantyhose on for Her. She slashes his back and ass as he cries and squirms, finally able to get his panthyhose on. Next his arms are strung up to the ceiling and his legs are spread very wide in the spreader bar as She whips his chest. She beats his front red and then produces the wooden cane. She shows it to him and tells him he is in store for a solid caning as She begins to strike the front of his thighs then moves around back and takes aim at his helpless, nylon covered ass.

The slave is starting to suffer under Mistress Missy’s cane. She moves to pull his pantyhose down and resumes beating his ass. Red welts start to appear as he dances around, amusing Her, as She hits him harder and harder. Her cane splinters on a huge strike and She is not happy, telling him his ass has broken Her cane. She moves to put on a huge strap-on as She stands in front of him telling him what is next in store for his worthless ass. She picks up the cane and resumes his corporeal punishment, the strap-on dangling obscenely between Her thighs.
Mistress Missy finishes tenderizing slave marco’s ass with the wooden cane and cuts him down. He is obliged to orally service the huge cock dangling between Her slim thighs and starts to suck the huge dong. She orders him to sit and climbs up on his thighs. Grabbing the back of his head She face fucks him with the dildo until he begins to choke and gag on the huge rubber cock in his mouth. Some great oral domination and then he is moved over the horse and She lubes up his ass and give him a prostate massage, Her tiny fist slipping in and out of his whore hole.
A super erotic treat for strap-on fans starts as Mistress Missy slips the enormous dick into marco and comes up on Her tip toes to begin to fuck him. She leans in and starts out slowly but quickly picks up speed as She buries the enormous rubber cock in the slave’s ass. Holding firm to his binding She fucks him hard. Hot now, She removes Her top and fucks him topless, Her perfect breasts bobble as he squeals and moans from Her thrusts. Lots of great strap-on action by a topless, pantyhose clad, exquisite Mistress.

More great strap-on in this clip as a topless Mistress Missy goes all out in ravaging marco’s asshole. Perfect breasts bobble and She stays up on Her tip toes driving the cock in and out relentlessly. She pulls the huge strap-on out of his gaping hole, makes him kiss and thank the cock that fucked him and puts Her high heels back on. No rest for him as She moves to insert the gigantic black dildo. Laughing She gives him half of it and begins to move the gigantic torpedo around inside his ass. Back and forth She stretches his hole out and attempts to jam the entire cock in.
The gigantic black cock is buried in marco’s ass as Mistress Missy swings a leg up and straddles his back. She rides on his back, insuring he cannot move and jams the black cock in further. Her weight compresses his internal organs and he groans as the cock in his ass feels even tighter. She canes him as She fucks him and then pulls the big dildo out, slick with his ass juices, and makes him kiss and thank the cock that She used to split his ass open. She orders him to lay on his back and lick the bottom of Her high heels clean while he masturbates for Her. She removes the shoes and Her tiny feet dance on his face as he begs for permission to release. She grants him that privilege and he shoots a big load as She watches. She smiles and tells him to clean up his mess and walks off. 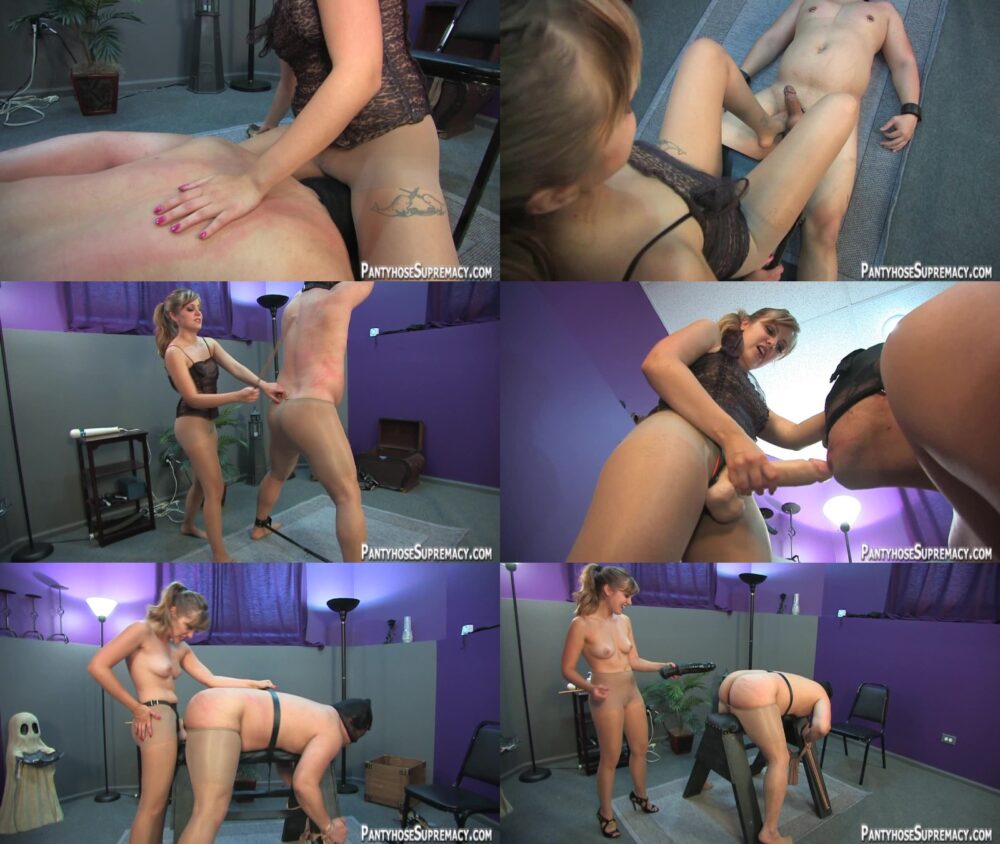