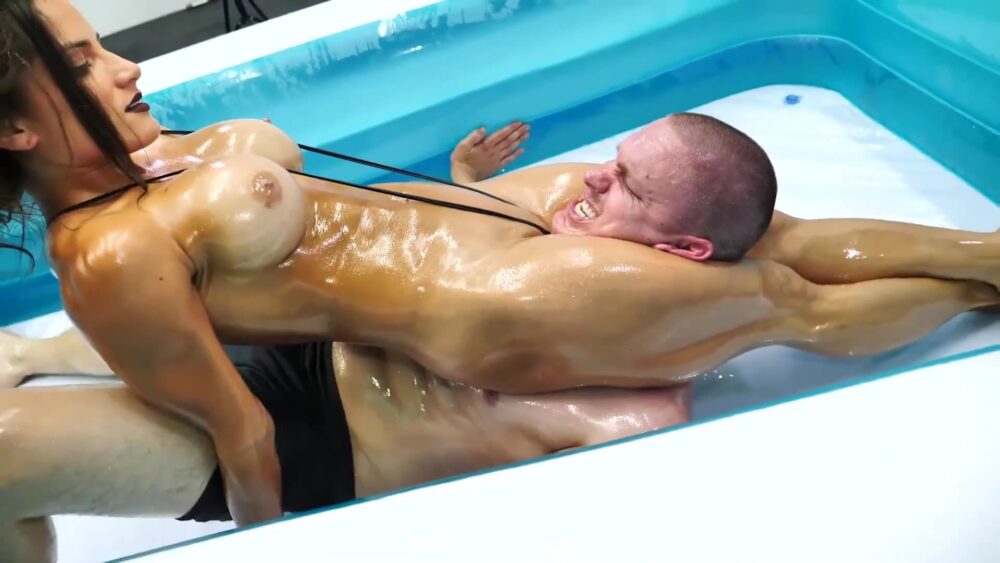 "This poor newbie had NO IDEA what he was getting into when he volunteered to get between my SAVAGE OILED SCISSORS!"

One of our most-requested ScissorVixens over the years has been that AMAZINGLY SEXY and POWERFUL Chichi!
Scissor-fanatics everywhere certainly have seen her on our site, and many others, totally DESTROYING men between her skull-crushing ballet trained thighs over and over again!
Then suddenly…it seemed as though Chichi had disappeared as the requests kept coming in for MORE Chichi!
Well, your prayers, and ours were answered when we received a text from Chichi (a few days before the filming of this video) that she was soon traveling to Vegas and was ready to CRUSH some heads and a few ribs!
Chichi is now living in the big state of California and is a full-time yoga instructor, and we all know about yoga instructors…they ALL have a DEVASTATING SQUEEEEEZE!
So CAUTION…this video is not for the faint of heart!
This video was a special custom request and we have to admit…her extremely fit physique really shines all oiled up and ready to DESTROY!
Our scheduled victim for this video somehow forgot to show up (perhaps he had heard about Chichi’s dangerous legs!?) so we were very fortunate to reach out to another former victim who said his friend would be more than happy to give this a try.
We sent him quick photo of Chichi wearing the RIDICULOUSLY SEXY black sling-shot bikini worn for this video and before you knew it…they both showed up at our Vegas studio!
I warned the newbie…"Dude…I’m sorry this is how you have to get your ‘neck’ wet diving into the DEEP end of the pool with Chichi but at least you’ll be getting CRUSHED by a really hot looking woman tonight!".
He just smiled and said…"I got this…it will be fun!", while Chichi was standing just a few feet away!
I could tell by the smirk on her face, this poor boy was about to get DEMOLISHED!
And DEMOLISHED he was at the end of this MOST SAVAGE scissor video!
Only a few minutes in, he had to take a break and asked…"How much time is that because this is really starting to hurt!".
I did my best to give him encouragement to fight on and to his credit, and for a first-time newbie, he somehow found the strength to endure the PAIN and inflicted by Chichi’s SAVAGE THIGHS!
There’s the usual wide variety of scissors, and a few other holds mixed in, such as a back-breaking camel clutch with HOM (hand-over-mouth), vicious grapevine with breast smothering and one very AGONIZING body scissors where it appears our victim is about to vomit from the PRESSURE!
BUT…for you reverse head scissors fans…OH BOY…this is a real treat, as Chichi is in FULL PUNISHMENT MODE (our poor victim kept uncontrollably giving her static shocks in which Chichi was becoming increasingly pissed off at!).
Reverse head scissors is Chichi’s go-to technique and boy does she have it perfected, first scooping his head up DEEP into her ass with one leg then quickly closing the vise, allowing ZERO chance of escape!
Then the pulsating of her amazingly sexy, yet powerful, glutes begins as our poor victim’s SCREAMS could probably be heard from blocks away (thank goodness for soundproof materials!).
And this is how Chichi finishes him, in the last of many reverse head scissors, before allowing his head to crash to the ground (by this time…his neck must have felt like a wet noodle!) after somewhat mercifully ending his SUFFERING!
Chichi then stands over his limp body and challenges YOU, the viewer, by asking if you think you can handle her legs!
So welcome back Chichi, looking BETTER THAN EVER, in a video you DO NOT want to miss titled ‘Chichi’s SAVAGE OILED SCISSORS!’. 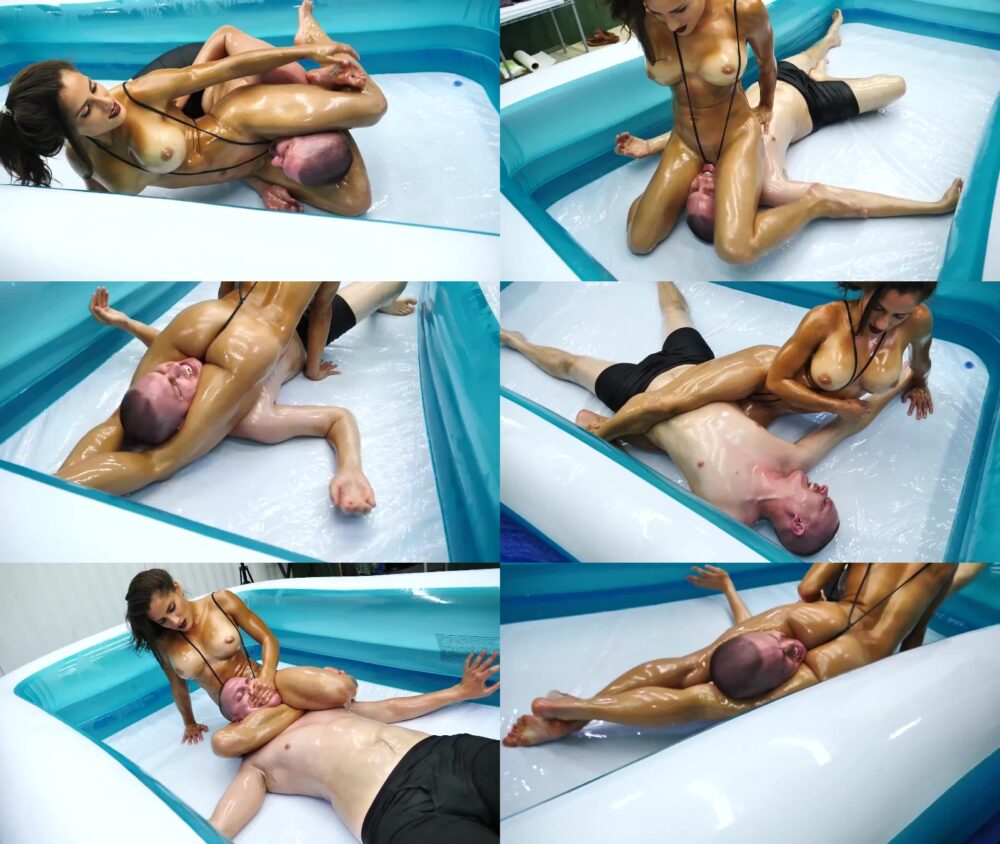